Our story begins when founder, Jim Carter, was an eight-year old growing up in Ohio. He would gather seeds from the maple tree outside his home and plant them in his relatives' yards. This was an early indication that Jim loved digging in the earth and watching things grow. 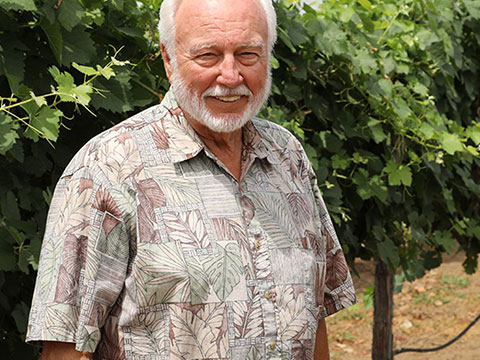 In 1981, Jim's father introduced him to a pristine region in Southern California with views for miles of the valley below. Perhaps he reminded Jim of his love for growing things as he encouraged him to purchase 400 acres here, which would later become our award-winning vineyards in the Southern California Temecula Valley.

In the mid 1990's Jim was at the movies, watching "A Walk in the Clouds." The classic vineyards that set the scene reminded Jim of his Southern California land. And the story of our Temecula winery resort and spa truly began.

Jim analyzed the water, soil and climate. Finding the conditions ideal, he started digging in the earth once more. He planted and nurtured the finest grapes with his own hands and the help of a hard-working team. Expert winemakers joined the team to create the wines that would establish the Temecula winery's reputation. Becoming a vintner inspired another chapter in Jim's story: building South Coast Winery Resort & Spa. Complete with villas, a restaurant and a spa situated in the middle of 63 acres, his story continues to grow, much like the vines he first planted.

As Jim tells it, "I wanted to share the complete wine country experience. Guests not only enjoy the finest wines paired with the finest foods, but they stay in a private villa right in the middle of a vineyard. We are Temecula Valley's only full-service winery-resort that gives them a glimpse of our lifestyle in one of the most beautiful places in Southern California."